Christmas is sadly over, the family have returned to London and I am bereft! Not so bereft, however, that I neglected to get Milady’s Masquerade out in paperback. 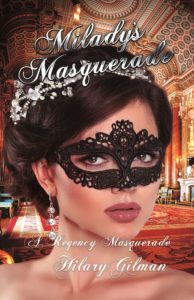 Lady Elizabeth Marlowe, a self-confessed bluestocking, is reluctant to exchange her quiet rural existence for the despised frivolities of the London Season. But when her cousin, the Grand Duchess of Catamanthia, is abducted, she is persuaded take her place at Princess Charlotte’s wedding celebrations. In spite of herself she must also accept the attentions of Lord Matlock, the most attractive man in London, whose motives she strongly suspects.

Meanwhile, the Grand Duchess, finds refuge with Colonel Julius Paige, a cavalry officer, terribly injured at the Battle of Waterloo, who must recapture his passion for life if he is to help the woman he loves defeat her enemies.

Two dashing heroes—two willful heroines—and the fate of Europe in their hands.