All of Hilary’s books 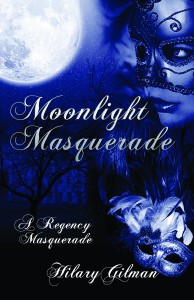 Moonlight Masquerade is not just the first in the Regency Masquerade series, it is also the first book I ever wrote. It began life in 1976 as The Silk Purse. Since then it has been, variously, The Master of Hawkwood, The Cat’s Cradle, and finally Moonlight Masquerade. The names of the character’s have also changed several times as has the nature of my heroine. To quote myself in one of my Delia Darling monologues ‘When I first began to write the heroine was of course a virgin and remained so throughout the book. Now editors just demand sex, sex and more sex. How they expect one to find the time to write I really don’t know!

So the innocent, submissive little heroine, Arabella, of The Silk Purse transformed over a period of nearly 40 years into strong, sensual, and far from submissive Amarylis Trent. She is still a girl wooed for her fortune by the handsome hero, who naturally falls deeply in love with her, but she is playing her own game with the dashing Marquis and Merry Trent is nobody’s fool.

I’m so  glad now that The Silk Purse never saw the light of day. It was, quite frankly, rotten. Most writers should probaly trash their first efforts. Georgette Heyer, indeed, successfully supressed several of her early works. I found them all in the UCLA Graduate School library and I think she overreacted. They aren’t bad, they’re just not as brilliant as her later works when she had found her wonderful, distinctive voice. 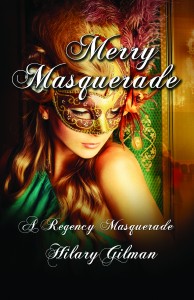 I’ve written and performed sketch comedy for a number of years and there is no thrill like listening to an audience laughing at your own jokes. So I decided to put everything I know about comedy into Merry Masquerade. The result, I hope, is what it says on the tin.

I am particularly fond of the scene where my hero, Robin, saves our heroine, Clarissa, who is masquerading as a rustic maidservant, from an irritable swan. I’d had the idea for a swan attack for some time but I had never actually seen a swan in attack mode and I always try to do my research. So I searched YouTube for ‘swan attack’ and found a short video of a just married young couple having their wedding photographs taken by a lake. A swan in the background suddenly launches itself at the bride, taking the hem of her bridal gown it its beak and tugging hard. She runs around in circles with the swan attached to her dress. Frankly, all I had to do was add some dialogue.

I also had fun with Clarissa’s vocabulary. She is in fact a well-born heiress but, in order to escape her step-brother’s odious plan to marry her to his dissolute friend, she passes herself off as a maidservant. The scene is set in Devonshire and when searching the internet I found a wonderful glossary of old Devonshire words and phrases. For example when her mistress, Lady Alderley comes up with a scheme to pass Clarissa off as her niece: ‘Lor!’ cried Clarissa, yielding to the promptings of her baser self once more. ‘I do be comin’ up in the world! Cruel full o’ condudle, I’ll be!’ Other good words are: fitty, bloggy and barra. 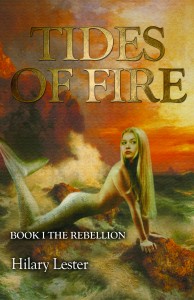 The paperback of Tides of Fire will soon be available and I can’t wait to reach the e-reader-free audience.

Every fantasy writer knows the seduction of creating a universe, giving it laws, language, and history. As empire builders go I’ve tried to be a little restrained, not everything has to be explained. Much can be left to the reader’s imagination. I hope the reader will be too caught up in the epic tale of warring merfolk to wonder about certain aspects of daily life under the ocean – except, of course, for merfolk mating practices, upon which I dwell in glorious detail.

This book contains one of my favourite characters, Kahlutu, the bad boy of the Kiakhu Clan. Beautiful as a maiden, wickedly funny, tortured, always alone, and driven by desperation to rid the ocean of ‘the disease that calls itself my father.’ Finding a friend in Leelee, a warrior maiden from the enemy clan he blurts out, ‘He’s a monster and he loves me. What does that make me….I’ve killed too, Leelee, just as casually, killed and tortured. If I’ve never raped it’s only because Vahtu’s son is never refused. He has made me as much a monster as he is!’ Kahlutu is not the hero of the book but I’m proud of him and his story of redemption. 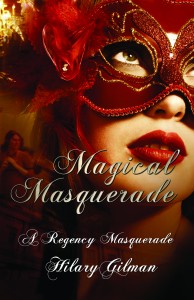 A magical Regency re-telling of Beauty and the Beast

Beauty is Minette de Saint Saze, a lovely innocent who must save her twin sister’s honour at the cost of her own virtue. The Beast is His Grace the Duke of Rochford, a bitter man with a heart as scarred as his own, once handsome, face.

Minette reluctantly takes her sister’s place in Camer Castle, the lair of the Beast, where she learns to know the real man behind the cynical mask Rochford presents to the world. She longs to heal his terrible hurt, yet she knows that, for her sister’s sake, he must never suspect that the girl who is falling in love with him is not the society Beauty who accepted his fortune and scorned his passion.

As love flames into desire, Minette comes to understand that the only true happiness she will ever know is in the arms of this damaged man who does not, and never can, belong to her.