I’ve taken far too long to write Book II of Tides of Fire, partly because the Regencies took over and partly from the writer’s equivalent of stage fright. Sequels are so often dreadful and disappointing – Jaws II? I wanted mine to be more Godfather II. And, to be honest, I had no idea until quite recently that anyone was waiting for it.

However, my editor is now going through the final manuscript of Book II: The Golden Queen  and I have just got the final proof of the cover which I think is just perfect: 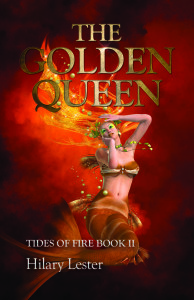 It’s hard to know with the blurb how much backstory from the previous book to include. This is my first, tentative effort:

It is twenty tides since Leelee and Makhulu parted. The tyrant Vahtu is dead and his wayward son Kahlutu sits on the throne in his place. Leelee has been forced back to the gentle reefs of The City to become her Clan’s reluctant High Priestess, while Makhulu remains in the cold black waters of the Kiakhu to advise and support the new king.

But the fragile peace between the Clans is threatened on all sides, by those for whom the war was profitable, and others who cannot tolerate allies who worship a different God. Then a catastrophe strikes that makes all their squabbles appear trivial and introduces Leelee and Makhulu to The Golden Queen.